Writing a self-help memoir: An Interview with Gael-Sylvia Pullen on The Good Around Us Revising a How-to Book on Social Media: An interview with Cathy Turney

Writing a Children’s Picture Book: An Interview with Seamus Kirst 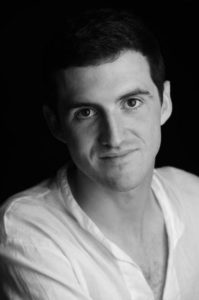 Seamus Kirst, who was interviewed after the release of his memoir Shitfaced, shares his inspiration on the writing and publishing of the children’s picture book Papa, Daddy, and Riley

The Vision for Writing a Children’s Book

Michael Gleason: How did you come up with the idea for Papa, Daddy, and Riley ?

Seamus Kirst: I loved reading when I was a kid, and it’s always been a dream of mine to write for children. When I started trying I had a few ideas that just didn’t work – they often felt too pedantic and forced.

A friend then gave me the advice, “Write a book that you wish had existed when you were a kid, or that you want to exist when you have kids.” From that advice, I came up with “Papa, Daddy, and Riley,” a book that I believe meets both of those requirements.

MG: What is your vision for the book and its readers? 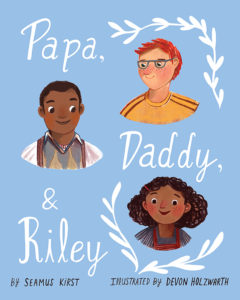 SK: Hopefully, this book provides comfort and underscores a sense of belonging for children with LGBTQ parents, or young readers who will one day grow up to be LGBTQ parents. The sign of true progress, though, will be when it is read and enjoyed — and the theme fully embraced — by children and adults who are not part of the LGBTQ community, as well.

MG: Talk a little about the research that went into Papa, Daddy, and Riley

SK: I researched other books that cover similar topics, because I wanted to make sure this book offered a new perspective. There are other books on this topic, and I am so grateful for the author who paved the way, when writing a book like this was truly controversial.

MG: How is writing a children’s picture book both similar and different to writing nonfiction for adults?

SK: One major difference is word count. In a children’s book you have to make every single word count, because you have so few. Additionally, you have to think about what messages you want to convey through words, and what part of the story will come from the illustrations. In adult nonfiction, if you do not put information in the writing, then the reader will not get it.

MG: What did you learn about the children’s book market in the process of writing and publishing this book?

SK: I learned a lot about the emphasis on buying books from diverse authors to tell the stories of diverse characters. There is definitely a movement within the children’s book market to increase and improve representation, and I am so grateful that I, as an LGBTQ writer, was able to be a part of that.

There is still so much work to be done to make children’s books more representative, but I was pleasantly surprised about the changes that are happening.

MG: Had you written for children before?

SK: I had not! I have written for teenagers before, but this was my first time writing for children.

Working with an Illustrator 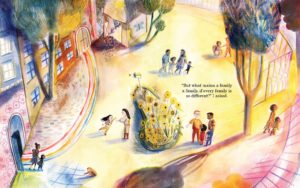 MG: Did you choose the book’s illustrator or did the publisher? What was the process?

Ultimately, the final decision was up to the publisher, but I am grateful I was able to weigh in on the process. I am so happy that I was able to work with Devon Holzwarth, who is so incredibly talented!

MG: What is the relationship dynamic like for a writer and illustrator and editor?  How is it different from a writer-editor dynamic?

SK: In my case, the editor served as the intermediary between myself and my illustrator, Devon.

Once the book was finished, Devon and I started talking over social media, and we get along really well. She lives in Germany, so we have never met in person.

Working with an Editor on a Children’s Picture Book

My relationship with my editors was different, because we worked together directly throughout the entire process.

MG: How many drafts or iterations did this go project go through? How directive was the editor/publisher in that process?

None of the suggestions changed the story too much, and I am grateful for the edits I received because I believe they made the book better.

It was also a great process because it was not heavy handed – the revisions were done through conversations. 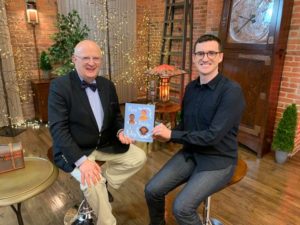 MG: Magination Press is affiliated with the American Psychological Association (APA); how did you get the APA’s interest in this project?

MG: Your other book, Shitfaced, is a memoir for adult readers; have you thought about writing for other ages, such as YA novel or graphic novel based around your youth?

SK: Yes! I would love to write a YA novel. I think YA is such a fascinating genre. Many of the boldest, most thought provoking books I have ever read are YA. I actually think this is the genre where I hope to land. Now, I just need to get to writing!

The Publishing Timeline for a Children’s Book

MG: What was the timeline like, after you signed a publishing contract?

The whole process took over a year and a half.

MG:What kinds of target dates and deadlines did your editor and publisher give you?

SK: The book did not require massive edits, so most of the deadlines were very easy to meet. Often, they would have a few small edits and would call me and we would go over them. It was a really cooperative process.

Role of Illustrator versus Author 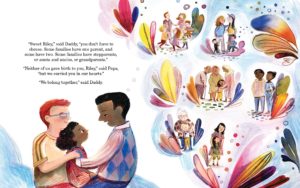 MG: In a children’s book, what’s the process for deciding how much text per page? Did your publisher give you any guidelines for that?

SK: It can definitely vary, especially depending on your target audience. For this book, the point was to make it easy for a child ages 4 to 8 to read, so we did not have a huge number of words. My agent gave me great advice and feedback on this with my initial draft.

MG: How often did you and Holzwarth not use narrative and let the illustrations “tell the story”? (i.e. some of the illustrations have details not covered in the text such as the student in a wheelchair, the characters Papa, Daddy, and Riley own a dog but is not mentioned or named)

SK: We did that quite a lot! But, I would give the credit to Devon for that. When I wrote the book, I put “suggested illustrations” in italics below the text.

My publisher said we should just let Devon do her thing, and she came up with so many amazing illustrations. She truly brought the book to life, and I hope to have the opportunity to work with her again!

MG: Congratulations on the excellent book reviews in Publisher’s Weekly and Booklist.

Seamus Kirst is a writer whose work has appeared in publications including The Washington Post, The New York Times, Teen Vogue, Elle, The Advocate, NBC.com, and Forbes. His writing often focuses on LGBTQ issues, mental health, and politics.  As a political and entertainment journalist he has interviewed politicians including Elizabeth Warren, Stacey Abrams, Pete Buttigieg, and Beto O’Rourke, and entertainers including Khloe Kardashian, Gabrielle Union, and Carmelo Anthony.
Seamus‘ first children’s book, Papa, Daddy, and Riley, came out on May 5th from Magination Press. The book received a starred review from Booklist. Seamus self-published his memoir, Sh*tfaced, in 2017.
Seamus earned his bachelor’s in history and ethnic studies from Brown University and his master’s in arts journalism from the Newhouse School of Public Communications at Syracuse University.
Tagged with → children's book • children's picture book • how to write a children's picture book • Inclusive children's book • LGBTQ children's books • Seamus Kirst • writing a children's picture book

2 Responses to Writing a Children’s Picture Book: An Interview with Seamus Kirst