Writing a Parenting Book from Experience: An Interview with Therapist Katie Naftzger

In this author interview, Write Your Book’s Charlotte Seaberry interviews Bring Your Book to Life® Program graduate and published author Katie Naftzger about Writing a Parenting Book. Katie’s book Parenting in the Eye of the Storm has just been published by Jessica Kingsley Publishers.

Writing a Parenting Book for Parents of Adopted Teens

Charlotte: What made you decide to write Parenting in the Eye of the Storm? Did the inspiration come at a certain moment or did you have the book planned for a while? 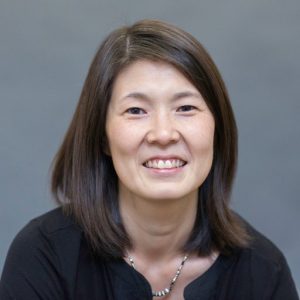 Katie: Originally it was a book about being an adopted young adult, which I was when I first started thinking about this! I consulted with the late, great Betty Jean Lifton about next steps. She said that if I wanted to write a book, I should write a book.

But, as I saw more and more adoptive parents of teens, I came to recognize just how high the stakes were. I became concerned that adoptive parents weren’t shifting their parenting style to match the changing needs of their adopted teen.

My eye was on preparing adopted teens for young adulthood and strengthening the relationship with their adoptive parents. The teen years can potentially make or break families, whether the teen is adopted or not. During these years, things can get a whole lot better or a whole lot worse!

In seeing literally hundreds of adopted teens over nearly 20 years, I’ve had the privilege of learning about some of their thoughts and feelings that don’t necessarily get aired at home.

The Book Writing Program that Got Katie Started

Charlotte: I know you took Lisa Tener’s Bring Your Book to Life® Program. What were you looking for and how was that book writing program helpful to you?

Katie: I’m a therapist first, not a writer and knew that the learning curve would be steep! I knew that I needed the support and guidance of a program and a community. One of the first decisions I made was to do Lisa’s Bring Your Book to Life® Program, which was just what I needed! The ideas, fellow writers and Lisa’s guidance and support were huge in setting me on the right path.

Charlotte: What were some of the first steps you took to start writing Parenting in the Eye of the Storm? Can you describe your writing process both in everyday and in the long term?

Katie: It took a long time to settle in! I had trouble scheduling it in and sticking with it so I just wrote whenever I could. For a while, I got up early in the mornings before the rest of the family to get a jump on it, in between clients and sometimes even in the car when I was waiting for the kids to get out of school.

What ended up working for me was to write half of whatever chapter I was working on, print it out, revise it and do the same with the second half. Although it used lots of ink and paper, printing and reading it out loud was important. What I also learned about myself is that I need to write the chapters in order. For a while I tried to jump around from one chapter to the next but it just disoriented and confused me.

Charlotte: The sections and titles seem conscientiously organized. Did you create a very detailed outline when you began writing? Did it change over time? If so, in what ways?

Katie: Yes, it’s certainly changed and evolved over time! The layout of the book was pretty different in the beginning. Initially, the structure was based on empathy, expectations and empowerment as the three keys to parenting adopted teens. But, over time, it felt too vague. I wanted to clearly delineate it as a parenting book. Exploring and better understanding adopted teens is just the first step, which is why I focused on the eight layers of loss for adopted teens in the first chapter.

Katie: Living life as an adoptee allows me the opportunity to convey experiences that are not usually put to words. I say in the book, that being adopted is akin to having “no words, no witnesses and no documentation.”

Looking at it from the inside, out is fascinating. Interestingly, I share more about myself in the book than I usually do with families I work directly with. They may learn some new things about me!

I was certainly influenced by my growing up years but was also acutely aware of wanting to respect my family’s privacy. Initially I wrote it without including anything about my family but then felt that something was missing. My work enriches my life and my life enriches my work.

Research for  Writing a Parenting Book

Charlotte: Did you have to do any kind of outside research before writing Parenting in the Eye of the Storm or was it mostly from personal experience? If you did do research, what was your research process and how did you translate that research into writing?

Katie: Of course, I familiarized myself with the adoption books that preceded mine. I studied the research that exists regarding adoption, particularly regarding mental health and suicidality for adopted teens. Sometimes adoptive parents will say something like, “Maybe we’re making too much of this adoption thing!” No, adopted teens are emotionally vulnerable. And, parents need to be informed without panicking. 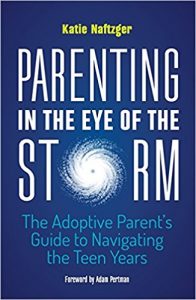 In my writing process, I used disguised versions of families I’ve worked with, but in time, recognized that I needed the story before the story that brought them into therapy. So, I put the word out to adoptive parents of teens who were interested in sharing their stories and got a great response.

Although I am an adoptee and a parent, and have worked with countless families, I’m not an adoptive parent. I wanted to make sure I was fully capturing the experience. I also spoke with a handful of adopted teens from around the country to hear from them what was on their mind.

When I was up against the manuscript deadline, I invited three adoptive moms whom I trusted to read through the first few chapters together and offer feedback. It was inspiring, and reminded me why I’m doing this project. As we read together, one would say, “Oh, that’s so you, Katie!”

Charlotte: You are deliberate about certain terms you use throughout the book, such as “teen” instead of adolescent and “adoptee.” Can you say more about your word choices? Did you make such conscious decisions for any other language in the book? If so, why?

Katie: I like “teen” because teens themselves use that term. I’ve noticed over the years that the term “birth mother” was often used when discussing international adoption and adoptees, whereas the term, “biological mother” is used more with children who were removed from their home. It makes sense. Children who were removed from their home were often not infants or newborn and so “birth parent” isn’t quite as fitting. That said, sometimes I interchange them.

Charlotte: I find it really interesting how you refer to the life before being adopted as an adoptee’s “story,” particularly as you share stories with the reader of adoptees reconciling with or discovering their stories. Do you find any connection with discovering your own story as an adoptee and your writing process? If so, how?

Katie: In the book, I talked about my professor who asked the class to recall a signature story and then share it with the group. I couldn’t think of one, and then realized that the story that I wanted to tell was the one that I didn’t actually have – my birth story.

Our identities are made up of a collection of stories, something that most take for granted. The loss of that story is interesting in that adoptees often don’t have anyone else in their life to tell that story. For international adoptees, the identity of the birth parent is often unknown and inaccessible. Those adopted in the United States may have contact with their birth parents on an ongoing basis, bringing its own complications, of course!

Charlotte: At times in the book, you use the second person and ask readers to imagine certain situations for themselves. What effect do you think that has on the reader, instead of just describing the situation from a third person point of view? Why did you decide to write it that way?

Katie: I’m inviting adoptive parents to be actively engaged in learning about their adopted teen’s experience. When I ask them to imagine themselves very differently, such as like the child on the Titanic, they can’t help but become emotionally involved… and vulnerable. That’s an essential part of empathy, particularly in the third task (Chapter 5) of having connecting conversations.

Charlotte: You also switch between sections that address the reader, your personal stories, and third person narratives of adoptees you worked with. I haven’t read many books that use all three points of view! What effect do you think this has? Was this a conscious decision to write and format the book that way?

Katie: It naturally evolved in that direction. I wanted to establish a level of trust by enabling them to get to know me more, like families do when they work directly with me. In sharing certain personal experiences, I wanted to be transparent about how I came to understand the experience of being adopted.

Particularly in Chapter 1 when I delve into the layers of loss, I wanted readers to see that there is loss in the adoption story itself, but if and how each adoptee experiences feelings of loss varies.

Katie: I wanted to explore adoption issues in a way that felt validating yet non-pathologizing for adoptees, particularly in the first chapter. I also wanted to inspire adoptive parents to rise to the occasion without increasing them feeling blamed or criticized. I believe that I’ve achieved that balance and the initial feedback has been very positive, but I’m looking forward to hearing more after March 21st when it becomes available.

Charlotte: You had Adam Pertnam, the founder and CEO of the National Center on Adoption and Permanency write your foreword – that’s very cool! How did you two start working together on that? What effect do you think it has on your book to have someone in that position write a foreword?

Katie: I agree! Our paths have crossed over the years and I deeply respect his contribution to the adoption community as a journalist and an adoptive parent. His book, Adoption Nation has become a household book. When I approached him to write the foreword, he agreed to read the manuscript. After that, he knew that he could put his full support behind it.

Charlotte: How can our readers reach you?

Katie: My book is available by pre-order through Amazon and as of March 21st, through Jessica Kingsley Publishers and on my website.

Readers can join my e-mail list at http://adoptiontherapyma.com. That is the best way to stay updated about the book, my blog and any new learning that I’m offering. I’m looking forward to being a guest on a few podcasts and other events. Details on my website!