Social Media for Writers: An interview with Frances Caballo A Dialogue with Nancy Sharp, author of “Both Sides Now: A True Story of Love, Loss, and Bold Living.”

Writing a Nautical Memoir: An Interview with Dominick Jones

All At Sea: Twenty Years at the Helm of Tall Ships

It all began with a Thames barge bought for family vacations.  Its successor, the converted Baltic Trader ‘Gray’ became home for Dominick and his family, including six children, for the next 13 years, sailing port to port across the Mediterranean and eventually—–and eventfully—-across the Atlantic.  In 1966, Dominick knew next to nothing about sailing.  By 1986, when he sold the converted Baltic Trader ‘Gray’ he had become an expert.  For those 13 years the author had no other home, and for half that period never spent a night ashore.  His telling of the tale includes clear technical descriptions, maps, drawings, and engaging personalities.  The 200-ton Gray under full sail, as you can see here [photo sent separately] is a most impressive sight. Here is my interview with the author about writing a nautical memoir.

RM: You sold the boat in the late ‘80s and published this nautical memoir about your boating days in 2013, 25 years later.  How did you remember so much detail? Prodigious memory or written records or help from family and others on the boat or on shore? 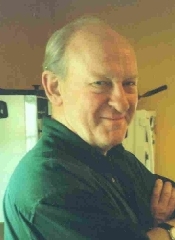 Dominick: Almost entirely from the working log books which were kept by the steering position and intended for real time observations by whoever happened to be navigated or steering at the time.  I started writing a nautical memoir only half a dozen years after I sold the boat so that many of the stories were fresh in my mind.

RM: Was chronology always the guiding principal in organizing the material for your memoir?

Dominick: Most of the book is chronological.  But the publisher wanted me to expand some technical subjects, such as making sails, and these have been dealt with on a subject by subject basis rather than chronologically.

RM: How much were you influenced by photographic and other aides-mémoire in choosing what to include?

Dominick: When I started writing a memoir I was living alone in a rented room with very little of my store of memorabilia.  The first to be called into use were the log books and I only started collecting the photographs at the very end, after I had finished writing.  The maps, of course, were only made just prior to publication.

RM: Did you feel at all that “the book wrote itself”?  How hard was it to write a nautical memoir?  What were the hard parts for you?

Dominick: Individual story bits wrote themselves, but everything else was difficult.  I had wanted to write a personal story more than a technical story but realized that, in order to make the two principal players and the change in our relationship interesting, I would have to risk offending.  In retrospect I now think I could have pulled this off with more effort and no damage.

RM: Were there earlier drafts and how were they different from the published All At Sea?

Dominick: There were twelve earlier drafts by which I mean major redrafting which I did myself, not from suggestions by outside readers.  It was almost twice the length in the earlier drafts.  At first I wrote out sections as they occurred to me, put them together, and fairly soon saw that I’d gotten a story that was not only rambling but far too long.  So the major edits articulated the story bits and eventually gave some overall direction to the overall narrative such that there were periodic trials from which we emerged better equipped to deal with the next trial.

RM: Non-fiction writers all roll their eyes when you ask about creating a book index (unless they can hire someone else to do it!)  What advice do you have for other first-time non-fiction authors about how to create a book index?  Think about your index as you write?  Get the best software to help with the process on completion?

Dominick: If your index is to have any completeness or complexity you have to have either a professional indexer or software. Obviously the index is only compiled when the book is complete.  But there is an awkward choice:  I found it difficult to think ‘index’ at the same time as thinking ‘typo.’  But the publishers expected me to do both jobs at the same time.

RM: Do you have any advice for other writers about software programs to compose a non-fiction book in?

Dominick: The most popular word processing packages are difficult to set up so that you can see what you have written – and particularly any images – as they would look on the page.  I therefore tended to compose, not in Word, but in a graphic design package. I switched from Quark to Serif, which I found to be more stable.

RM: Do you wish you had more photos than you did?  If so, of what? 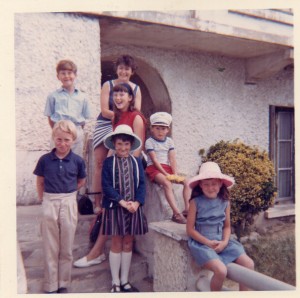 Cecilia (top center) and the six children she and Dominick took to sea.

Dominick: If you still have time, be sure you have appropriate photos.  In our case, the size of this operation would never have been attempted without numerous family and I wish I had had a few more pictures of the children doing unlikely things like scrubbing our hull while beached on the mud.  Since publication, readers have asked about the children and clearly would have liked to see more pictures of them in the memoir.

RM: When writing a memoir, who did you imagine as your reader or readers?  Was that a factor in composition?

Dominick: I didn’t think of a reader until I had done sufficient major re-structuring as described above.  To begin with I simply wanted to get the stuff down as accurately as possible before it disappeared in myth and legend.

RM: Some of the nautical language seems very poetical to me, enchanting words like ‘yardarm’ or ‘hove to’ for example.  Was it a worry to you that contemporary readers, especially land-lubbers, wouldn’t understand?  How did you decide which words to put in the glossary?

Dominick: Until the book was in the hands of the publishers I had not even the faintest idea that I was doing anything other than talking plain English.  I was totally taken aback by the questions asked by the editors and only realized I was talking a “foreign” language that needed a glossary at a very late stage.  You have to understand that this was the language that grew to be our own over twenty years.  We didn’t invent the words!  Each glossary entry has been checked in standard nautical dictionaries.  In a few cases I was unable to check a word and this has been explained in the text.

RM: Some parts of your memoir, of what you learned in the process of staying afloat, are very technical and beyond the reach or interest of some readers who will prefer the amusing in-port encounters.  How did you decide on the best way to handle that?  Were there options you rejected and, if so, why?

Dominick: I seriously considered withdrawing the book from publication if I had been obliged to put relevant technical information into end-notes. Footnotes would have been precluded by the length of the notes.  Therefore I realized that much of the narrative could be read without too much technical expertise but where I have voluntarily expanded on the technical side the material is indented in the text so that the reader can skip it.  I always intended the book for the general reader.

RM: How much additional research did you do?  On-line? Reference books of the period?

Dominick: This was our story as it happened to us.  So it was irrelevant to attempt to generalize to other ships and lives.  However I did check the vocabulary as I’ve explained. If you have to make maps, make them simple, trace from a school Atlas or something like that, don’t invent your own personal map projections as I did.

RM: Did you read a lot of sea-going memoirs as you were writing?  Or did you avoid doing so to keep your own story unsullied?

Dominick: You have to remember I’m a technician; I don’t have even the remotest interest in sea-faring yarns. 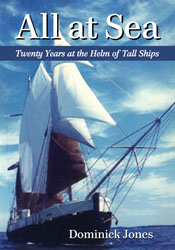 RM: In general, do you prefer reading non-fiction or fiction – or something else? What books have had a lasting impression on you and might have influenced your own writing?

Dominick: The most influential book I’ve read about the construction of the written word was in fact about movie script writing, and that was in relation to writing a play that depicted a non-nautical situation.  (I spent five years running a small theater.) I learnt the most from books on play-writing, running a theater, and from my mother, author Enid Bagnold, author of National Velvet, who said that twice a page you have to grab the audience to stop them going home.

RM: What have you learned as a result of publishing the book – both about your maritime experiences from readers’ questions and about the publishing industry?  You are your mother’s de-facto literary agent so you certainly knew more than most first-time authors.  Any surprises there?  Are there copyright pitfalls you’d warn new authors about?

Dominick: First time authors probably know that they have little or no negotiating power. I knew I could not get any of the features I’d seen in my mother’s contracts, like separate film or TV rights.

RM: Did you use an agent to find your publisher, McFarland?  If not, why not?  Did you ever consider self-publishing?

Dominick: Since an elderly white male is unlikely to produce a steady income stream, no agent was interested in me.  After I’d made the rounds of major publishing houses who didn’t find All At Sea fit into their business model, I considered self-publishing, which is technically fairly easy and cheap, but I knew I couldn’t cope with either the marketing or the fulfillment.

RM: Publicity: how are you handling that? How involved is the publisher?  Are there ways you’d like to try but don’t have time or opportunity for?

Dominick: Publishing is almost entirely about publicity and marketing since in the initial stages no one has the slightest idea whether the content being sold have any value whatsoever.  For example, in a bookstore the first thing you are likely to see is the spine.  How catchy is your spine?

RM: What have you learned about yourself in this process?  Looking back at your experiences on the barge and on Gray?  Looking at the writing to publishing odyssey?

Dominick: The most important lesson I’ve learned is that writing is not the same as speech, which very often runs the story backwards first and is often expressed in incomplete syntax whereas writing frequently starts with the main point and uses complete sentences.

RM: Are you willing to talk to others writing a nautical memoir who might like advice or encouragement?  How best to reach you?

Dominick: Certainly – and they can reach me through my website: and go to ‘curriculum vitae.’  The email address appears as a picture, so you will have to copy it manually.