Tea, Time and Serving Your Readers: An Interview with A. R. Williams 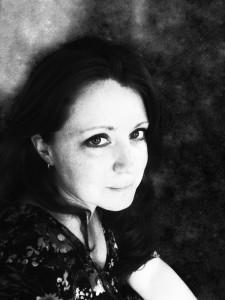 LT: Do you have a writing ritual to get into the frame of mind to write?

ARW: It doesn’t feel like a ritual, but there are things I do to get settled.  Music is a big part of getting in the right frame of mind.  I have a SoundCloud account, and I usually end up building a playlist for the project at hand, but that might be a procrastination thing…  It isn’t like I can’t write without a playlist, but building a playlist feels like progress when I’m really futzing around.  So music first, and the I go back and read what is already on the page to get back in the rhythm and mood of the story.

Tea. There is usually a flask of tea involved if I’m at home. And my little glass tea cup.  It’s silly, but it is mine.

LT: I love tea to get the in mood. One of my favorites is Creativitea, a tea developed by literary agent Regina Brooks. Aside from music and tea, what else helps you get in the flow of writing? Is there a specific time of day you write best? A specific place?

ARW: Unfortunately, I don’t have the luxury of being persnickety about where and when I work.  If I’m ever lucky enough to write full time, there will be an office and a window and good light, but for as long as the business of buying groceries requires me to have a full time job, I write wherever I can.  Plotting takes place in the shower, or when my hands are busy washing dishes, or when I’m on the metro commuting.  I write on slow days with a notepad in a conference room or using Google Docs wherever I happen to be.  I’ve got to work the writing in where I can, otherwise, it would never get done.

LT: Do you ever get writers block? If so, how do you get out of it?

ARW: Writer’s block is a constant.  Being a writer is a little like being a CEO: you’ve got to find an answer to all the questions no one else can solve.  And I write myself into some big ones.  The upside of my situation is that I don’t have to meet a deadline with my writing in order to eat, so I have the luxury of the most effective tool for dealing with writers block: accepting it.  I go do something else and let whatever seems impossible percolate until I can back my way into a solution that touches the five senses and feels real.  Then I write it out.  Alternately, if I’m working against a self-imposed deadline like NaNoWriMo, I deal with writers block by filling in the edges around what’s already written until I work my way into new material that doesn’t feel like hauling granite uphill.

LT: What did you enjoy most about writing The Camellia Resistance? 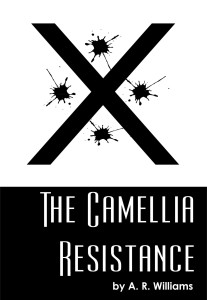 ARW: I don’t think I’m alone in saying that the best part of writing anything is having written.  When you are in the process of writing, it feels like you’re moving forward in such small increments that it seems impossible that you’ll ever get it all out. You can’t think about the entire thing because you’ll get discouraged. So the focus becomes on little victories along the way: an interaction that you write down, review, and realize was exactly the thing you wanted to say.  For example, Willow and Ianthe have an interaction early in the book.  Willow is in full meltdown because the agreement she thought she had with the world, where if she was just good enough, if she just obeyed the rules carefully enough, nothing bad would ever happen, that agreement has fallen apart, and she’s fallen apart with it. Ianthe is frustrated with her wallowing and gives her a lecture about the real world being a messy place, and living being a messy business, and if she wants a guaranteed outcome, she might as well give up and die then and there.  The conversation felt real to me.  It was on the page, but it was solid too.

LT: Do your characters ever surprise you?

ARW: Morrigan shows up later in the book. She’s this crotchety old pot-smoking lady.  She doesn’t want to get sucked into caring about anyone or anything, and I love her.  She just arrived on my metaphorical doorstep one day, fully realized and entirely herself.  I guess the things that I enjoyed the most were also the most unexpected.  The story I sat down to write for NaNoWriMo 2009 bears little resemblance to the book that was published: the best parts of the book were the things I hadn’t planned.

LT: I love that. Are you enjoying promoting the book?

ARW: I am enjoying having a PR professional who knows what she’s doing, Isoke Salaam. The things that make me good as a writer aren’t that great when it comes to promoting my book, or myself.  Any successful promotion work has been me following directions, not me creating a brilliant strategy and executing it.  I owe my publicist a debt I’m not sure I’ll ever be able to repay.

LT: Any surprises in writing, promoting or publishing the book?

ARW: There are plenty of surprises in this process.  I was surprised when this quirky little story (and its dreadful first draft) somehow earned the support of my best friend and editor, who has been a staunch advocate the whole way through.  As mentioned above, I’ve been surprised by characters, by scenes, and at times, by the oddities my brain comes up with. There was so much about the publishing process I didn’t know when I started.  Taking the independent/small publisher route puts so much more of the onus/control/responsibility in the hands of the writer.  I wasn’t surprised by how much I didn’t know, because I was aware of how new I was to the back-end part of the publishing industry, but there was a lot of stuff I had to learn.

LT: Can you offer one parting piece of advice to our readers, particularly novelists?

ARW: For me, the most important thing for aspiring (or established) novelists is the motivation behind the writing.  Write for love.  Write because you want to give something to the world, not because you’re expecting to get something in return. If it is the accolades or the ego boost you’re after, there isn’t going to be much to feed you through the ups and downs of writing well. If you’re writing because you want to give something to your audience, it puts you in the right place for accepting and implementing edits and rewrites. It raises your standards and it levels your expectations.  The audience owes you nothing.  You’re asking them to give up their reading time to let you create a brand new world in their head.  You’re asking them to trust you as a companion in their beds and baths, through their darkest days and on their vacations.  When you write from a place of service, you understand that is a privilege you have to earn.  Everything else that goes into writing well flows from the why behind your writing.  Write for love.  Write for service.  Write because it is the thing you can give, and only you can give.

LT: That’s so beautifully put. And I think a common thing we have to remind ourselves when ego gets in the way.

ARW; My adopted grandfather shared the following Martha Graham quote with me in a letter of encouragement that I keep with me and re-read often.  He prefaced it by reminding me that it wasn’t my job to judge how worthy the gift was, it was only mine to give it to the best of my ability.

There is a vitality, a life force, an energy, a quickening, that is translated through you into action, and because there is only one of you in all time, this expression is unique.

Write because you want to serve, and the way your expression emerges into the world is through words.  Give that expression everything you’ve got, and give it with love.  The rest will follow.

A. R. Williams is a writer, editor, and long-time resident of the DC metro area. Ms. Williams writes dystopian fiction.  Her debut novel, The Camellia Resistance, is the first in a trilogy about power, control and what happens when life doesn’t turn out the way you thought it would.  The Camellia Reckoning, the second in the trilogy, is expected in the spring of 2015.  You can reach A.R. Williams on Twitter – @entrope.
Tagged with → Author interview • writers block • writing advice • writing tips