Tasting the Past: An Interview With Kevin Begos An Interview with Ivy Keating: Persistence Pays Off with Publication 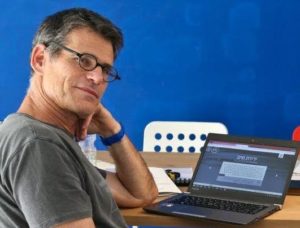 The Short Story Contest and Project

Iftach Alony: Since I remember myself, short stories were my passion. I believe life is more of a flip-flop event than a continuous one, and therefore can be better explored and investigated through short stories rather than novels.

I thought that there is not enough attention to this great genre which better suits the current pace of life, like it or not. Vision, hmm…, it’s somehow against my belief – to have a vision. I strongly believe that what happens, is happening now, and that what we do is ‘correcting’ the past with the future.

I may say that I strongly believe that short stories can describe and reveal humanity’s condition better than any other art, and therefore take the roll of transforming cultures.

The other ‘vision’ was that the Project will encourage reading, as I strongly believe that reading is the primary tool to enable one to expand language capabilities – and language determines how close we can get to each other. Language, as well, enable us to reject clichés, and to be vibrant in criticizing the stream of information which is out there.

Lisa: Who is Short Story Project for?

Iftach Alony: We have a large variety of stories, from classics to cutting edge literature. One can stroll between languages and geographies, and between detective stories and experimental ones. We have stories which were translated from more than 40 languages and which originated from 52 countries – a huge variety which creates a “literature carpet” on which one can fly like Nils Holgersson.

Lisa: Wow, that breadth and international flavor is exciting.

Iftach Alony: I believe that the imaginary is part of the real, and not a separate entity, and in order to ‘practice’ this imaginary part of us, we must read, it gives us the ability to ‘get out of ourselves’ and explore different and wider perspectives of our fears.

So it is for everyone who wishes to stretch his muscles and explore.

Lisa: I love that orientation that the imaginary is part of the real. It opens up such possibilities! Please tell us about the short story contest coming up.

The competition will reach 100K lit-lovers and we expect to receive at least 4,000 submissions.

Lisa: Who is judging the short story contest and what are you looking for in a story?

My personal wish is to find stories which successfully evolve out of the linearity of the text.

Lisa: Can you say more about that? What does it mean to evolve out of the linearity of the text? Do you mean that it starts in a linear way and becomes surreal?

Iftach Alony: Lisa, yes, it is like watching both sides of the tapestry, on one side one can see a clear realistic figure or thing, on the other he watch the chaotic ‘drawing’ of the sewing thread. It can evolve to surreal or shift into a dream taking the reader to the other side of the curtain without noticing.

We can see this, for example, in the stories of Kafka, Borges, Cortazar, Daniil Kharms, and lately in  George Saunders stories.

Lisa: Can you take one of those and share how it evolves out the linearity of the text?

Iftach Alony: In one of Kafka’s best-known stories, The Metamorphosis, there is the inexplicable transformation of Gregor Samsa into huge insect and his subsequent struggle to adjust to this new condition, taking place in the real and surrealistic worlds both.

In George Saunders stories from his book Tenth of December, almost each story is a voyage in which events are going on reality, evolving into blurred or surrealistic situations, shifting back into reality, and so on, whether it is the inner voice of the characters or the whole scene.

In Daniil Kharms stories, it is always a realistic situation which is there, while the ‘sewing string’ is despairing into bizarre situations, etc.

Lisa: What do you think makes a great short story?

Iftach Alony: Julio Cortazar has been quoted saying that a good story is one which ends in knockout (while a novel, he said, ends in points). I do believe that if, in a few lines, a writer takes the reader on a journey which shakes the reader’s beliefs and fortresses, making him re-think his concepts, or making him re-explore what he was sure is reality, it is a great story.

Lisa: Thank you Iftach. And to our readers, good luck if you enter the contest! For those interested in writing fiction, check out my interview with C.S. Lakin on Plotting a Novel and these tips from fiction writers on how to find your writing voice.