Cartooning for a Cause: An Interview with Comic Artist Peaco Todd Author Spotlight: Channeling Your Creative Consciousness with Dr. Patricia Hoy

Publishing Fiction: The Rebirth of a Novel 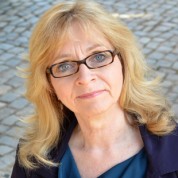 The story of my novel The Algebra of Snow spans the seismic shift in publishing and marketing.

When I wrote the story that evolved into the novel I had a fresh Master’s degree in English from the University of Virginia and had just begun to write fiction seriously. The measure of success at that time was getting a short story in the New Yorker and a hardback of a novel from Random House. I had gotten favorable attention from The New Yorker and had mentors who regularly published hardbacks, so I was hopeful.

When we think about publishing fiction, we often think that it has always been a certain way, quite possibly the way it was in the 1920s, 30s, and 40s in America where a small group of writers made their living as writers and were shepherded through the process by kindly editors. Fitzgerald, Faulkner, and Hemingway come to mind, with Maxwell Perkins as everyone’s dream editor.

But the truth is that publishing is characterized most clearly by CHANGE.

From 30,000 BC when cave dwellers painted on the walls to express themselves to the community through the invention of the printing press in the middle ages to the self-publication of Common Sense by Thomas Paine, the explosion of magazines in the 1940s to the invention of e-books and the iPad in the 90s and 2000s, there has never been a time when publishing wasn’t in the process of becoming.

It has never been easy to publish with the commercial publishers; they have always been interested in profit and even the writers who did well in the “golden age” worked unbelievably hard, often making their living not from their books but from magazine articles and stories, screenplays, and giving lectures.

What has remained the same is that an individual has a vision he or she wishes to express to the community and finds a means of doing so.

So where does that put us in the 2010s? Commercial publication is no easier now than it ever was, but if you want to write a book these days and get it out to the public, we’ve never had it so good!

You might ask yourself some questions to figure out how best to position your book: Is your book fiction or nonfiction? If nonfiction, is it memoir or how-to? What are your dreams about the book? What are your fears? Where are you in the process? (If you’d like a checklist for questions, email me at ginger@gingermoran.com.)

When my first son was born, I simultaneously got an agent—Lisa Bankoff at ICM. A great coup and cause for celebration all around. After a number of submissions—to many editors who loved the book but felt it wasn’t sufficiently commercial—my agent reported that it was being nominated for a Pushcart Editor’s Choice Award by an editor at Doubleday. Though it didn’t win the award—and wasn’t taken for publication then either—it was quite good progress for a first book.  I wrote another one.

I got another agent. The short story of The Algebra of Snow was published by Feminist Studies. I had another baby. I got another job. I moved. I started another book.

I was regularly publishing short stories, essays, and articles. I finished the second novel and started another one. The agent sent my novels out. 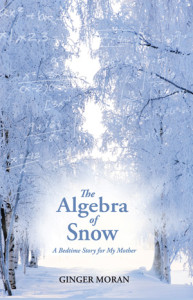 And eventually, in 2012,  The Algebra of Snow was published by a small press in Charlotte, NC: Main Street Rag.

By then, the whole publishing world was different.

Books were regularly and successfully being self-published. People were learning how to market their own material. There were only five commercial houses left and few were publishing fiction. Yet fiction was thriving.

Because the world had changed. And people were finding reading, and recommending books on their own, to friends, and the word was going out the way it used to—person to person, friend to friend. And books were being downloaded onto computers and that made them even more available. And more people were reading, ravenously.

If you are thinking about marketing your book, you might ask yourself these questions: who do you know? Do you have a website? What social media are you already on? What are some topics you might blog about? (I have a checklist for this too–email me and ask for it: ginger@gingermoran.com.)

One way to attract readers is to offer a set of bonuses. With an The Algebra of Snow ebook order, readers get four custom-made resources:

The bonuses are immediately available, as soon as you order the book and forward the Amazon confirmation email to a specific address. Order the book BY MIDNIGHT 16 NOVEMBER to get the bonuses!

So now this survivor of a book, The Algebra of Snow. like its heroine, is emerging in a different world—as an ebook this time.

Plus ca change, plus c’est la meme chose, the French say—the more things change, the more they stay the same. And that certainly goes for publishing and marketing—the essence is the same as it ever was: have a good idea, write a good book, reach out to your friends and fellows, and never lose faith.

2 Responses to Publishing Fiction: The Rebirth of a Novel