Book Publicity Inside Tips: An Interview with Publicist Janet Appel Publishing Fiction: The Rebirth of a Novel

Cartooning for a Cause: An Interview with Comic Artist Peaco Todd

Charlotte: Why did you decide to start making Earth Comix? Where did the inspiration come from? How did you learn to draw comics? 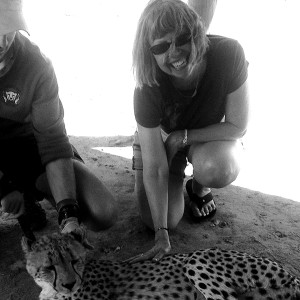 Peaco: First, let me describe what Earth Comix is.  We’re a web-based organization—earth-comix.com—and a non-profit corporation, Earth Comix Incorporated, with IRS 501(c)3 tax-exempt status, whose mission is to use comics to educate and raise awareness of the plight of animals endangered from poaching and trophy hunting.  The website features two main comics:

In early 2015, when my husband John Bradley and I traveled on vacation to South Africa and Zimbabwe we assumed it would be fun but hardly life-changing.  How wrong we were!  We were already generally aware of the dangers to the animals from poaching and habitat loss.  While on safari we learned about how dire the situation is for rhinos and elephants in particular: the traffic in ivory tusks and rhino horn is booming—we were told, in terms of profit second only to human trafficking.  We were horrified to realize that due to people willing to buy illegal ivory for jewelry and ornaments, and banned rhino horn as an aphrodisiac (which is completely ineffective) and as an imagined cure for various illnesses, and tiger pelts for rugs and their bones for tiger wine hoped to impart the recipient with a tiger’s strength, these magnificent animals might be driven to extinction. Faced with a situation we found to be intolerable, we were determined to find a way to get involved by using whatever talents we possess. The result is Earth Comix. 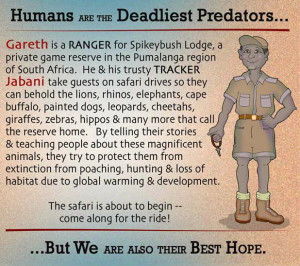 I’ve been a cartoonist, and a member of the National Cartoonists Society, for many years but I’m completely self-taught.  The bad news is that I’m sure there are useful techniques that, had I been in school, I’d have learned.   The good news is that I’ve been free to develop a style that’s all mine – I didn’t have my unique vision and approach trained out of me.

Charlotte: Does this comic have a specific target audience? How did you decide what audience you were writing to? Did you write the comic with that audience in mind? If so, what are some of the things you did in your writing to target and engage that audience, such as use a particular voice, vocabulary, structure, etc.?

Peaco: Since we’re just starting out, we’ve targeted a broad audience.  This issue – preventing the extinction of iconic animals due to poaching and trophy hunting – is one that should affect everyone: more than any other time in history we truly inhabit a global community and these animals belong to all of us.  To sacrifice them, especially for such trivial reasons as trinkets and useless medication (not to mention the criminals who stand to profit enormously from this traffic), would be such a black and shameful mark against our responsibility as stewards of our precious world.  Eventually we hope to create material specifically for school children, in Africa, China, Russia and the United States and establish a series of grants to support anti-poaching projects.  But for now, we are hoping to engage and educate a broad range of an audience.  We are soliciting donations—tax-free!—to further our mission and to be able to support other organizations doing complementary work.

Charlotte: Had you had an interest in environmentalism and anti-poaching work prior to starting the comic? Or did your trip spark the interest and the comic was the result of that?

Peaco: I’ve always cared about, and supported, animal welfare and the environment.  I was aware of the ongoing mass extinctions of species due to climate change and habitat loss, but I hadn’t been fully aware of the very real acceleration of extinction of these large mammals solely through human criminal action.  The Africa trip galvanized me.

Charlotte: Do you have to do any research to write one of the Earth Comix? If so, what does that research process look like? 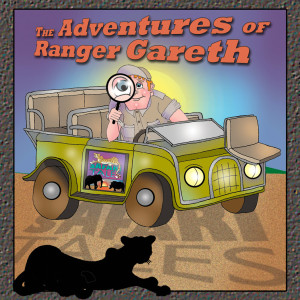 Peaco: We’re very lucky to have a real safari ranger and professional photographer, Gareth Legg, on our team.  One of our two main comic features — “The Adventures of Ranger Gareth” – gives true accounts of Gareth’s experiences taking people into the bush to observe the animals in their natural habitat.  Gareth is tremendously knowledgeable about the animals, their habits, behavior and environment, plus he’s a highly accomplished photographer.  Our other feature, “Safari Tales,” is a fictional narrative. Unlike the “Ranger Gareth” comics, where Gareth provides the research we need, our goal for “Safari Tales” is to create a compelling story, a story with humor and sympathetic characters, one that people will want to follow weekly.  We will be researching details of the poaching, trophy hunting and habitat loss problems both in web- and print-based sources as well as communicating with organizations with similar goals, such as refuges and sanctuaries.  We hope to have periodic contributions to our blogs in Earth-Comix.com from such like-minded organizations who can share their activities with our readership.

Charlotte: Why did you choose to use the format of a comic series? What effect do you think this format has on the reader as compared to prose? Do you think your message is more easily conveyed in the comic format?

Peaco: Comics are a very interesting medium.  Cartoons and graphic narratives have the power to move hearts as well as minds. They also engage a reader more fully than simple text, and images are mentally retained better than textual references.  Cartoons are immediately accessible – my experience is that cartoons are very effective at reducing resistance and drawing people into the story.

Because they comprise narrative storytelling in a vivid visual context, comics can have a stronger and more immediate emotional impact than prose, especially ‘prose with a message,’ which can come across as pedantic.  The issue of extinction must become a passionate, as well as a rational, one.  People have to care.  I know we do – Earth Comix is absolutely a labor of love.

Peaco: The biggest difference, I imagine, is incorporating the visual element.  I try to make the visual aspect not just illustrative of the narrative text, but as an element that adds an additional dimension to the story.  That requires that I interpret the material on two levels, verbal and non-verbal.  The similarity is that good storytelling is good storytelling regardless of the medium.  Comics do dictate that the text be much more spare than in a prose narrative – there’s just no room on the page for anything non-essential.  A comic narrative has the benefit of wordlessly adding an emotional component to the narrative—the facial expression of a character, a bleak surrounding—without needlessly adding text.  But comics and prose share the same requisite to be clear, authentic and compelling.

Charlotte: What does the process look like to create one of the Earth Comix? How do you get the initial concept for the comic and how do you begin making it? How does the writing and art come together? 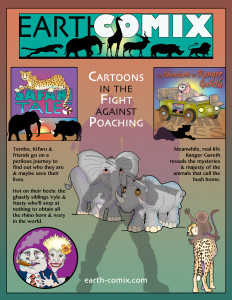 Peaco: Every cartoonist has a unique process – for me, it begins with the words.  I conceptualize the idea (primarily the story arc) and then I start to work on the dialogue.  Only when I have that in manageable form (meaning I’ve edited the text to its essence) do I think about how to make it come alive visually.  As I mentioned before, my goal is to create a visual element that adds to the story rather than just illustrating it so therein, for me, is the challenge.

Charlotte: How do you publish the comic? What steps did you take to get these comics published? How did you decide who to work with to make this comic?

Peaco: Since Earth Comix is a 501(c)3 corporation we’re able to use our website as our platform.  At some point we might consider publishing each of our two main comics as either downloadable PDFs or as hard-copy comics, but that’s in the future.  For now, we’re creating web comics.

How is the writing and publishing process for a comic different from that of a novel or other kind of written work?
Powered By the Tweet This Plugin

Peaco: Since the world of publishing has changed so much in the last few years that’s a hard question to answer.  One obvious difference between text-only publications and comics is the need, in comics, for high quality reproduction – or display – of graphics.  While self-publishing has become a viable alternative for many novelists and non-fiction writers, it’s not as feasible for cartoonists and comic book creators due to the potential problems with reproducing high resolution images.  The increasing popularity of web comics is a great development for us. 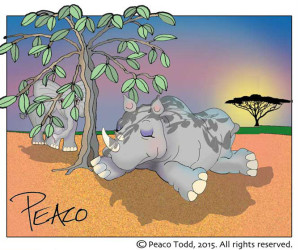 Peaco: So far the response we’ve received has been very positive – people tell us they love the approach and the work.  What we hope is to be part of a worldwide effort to save endangered animals from extinction.  And I want to reiterate that these specific problems that we are addressing—poaching, trophy hunting and habitat loss—are primarily the result of human actions, often criminal actions.  Many people are contributing to our cause in many different ways: from, for example, writing op-ed and other articles to urging people not to buy items made of plundered ivory to establishing/funding sanctuaries for orphaned rhinos.  Using cartoons to raise and maintain awareness is an unusual approach, if not unique, and if our work can make even a small difference then we will have succeeded.  And of course we hope to make a big difference!

Charlotte: What are some of the ways you’re spreading the word about your comic and about the issue of poaching in general?

Peaco: We’re brand new, so right now we’re focusing on putting the word out via social media and individual connections.  We’re also planning a PR campaign as well as reaching out to other organizations to explore partnership opportunities.  Eventually we hope to be able to offer grants to schools and other organizations to support projects, particularly art-based projects, which are aimed at educating people about the critical importance of preserving these animals.

Charlotte: How can our readers reach you?

Peaco: We would love to hear from your readers!  On the website – earth-comix.com – there’s a Contact page.  Anyone interested in helping financially can donate directly via the web page or via mail, per the instructions on the web page.  People also can contact me at [email protected] or [email protected].

Peaco Todd is a syndicated cartoonist, author and professor.  Her love of travel has taken her to the bottom of the world on two continents, down the Suez Canal on a sailboat, from the glaciers of Iceland to the Amazonian rainforest—the beauty and fragility of our planet and its creatures has inspired her to create Earth Comix with her husband John Bradley, an environmental engineer and attorney.  They live in the Boston area and New Hampshire with their two cats.  You can see other projects and interests at www.peacotoons.com.

Note: This writer cares about typos. If you find one, click here to be part of the EditMob – it’s anonymous.