Author Spotlight: Stephen Snyder, MD Takes Us On the Journey to a 6-Figure Book Deal

A Crash Course in Platform

I met Dr. Stephen Snyder when he emailed me during the early stages of writing his book.

When he decided to seek a traditional publisher, I provided a bit of a “crash course” in developing platform and Dr. Snyder did a stellar job of raising his visibility online and offline in order to make a powerful case for his book.

He didn’t rush the platform building and only returned to me to work on the book proposal when his platform had grown significantly—being quoted or featured in Cosmopolitan, Men’s Health and Elle Magazines, among others, and even a collaboration with Dolce & Gabbana for the debut of their perfume Desire.

His patience and hard work paid off in finding an excellent and highly collaborative literary agent who negotiated a 6-figure book deal with St. Martin’s Press / Macmillan for Love Worth Making: How to Have Ridiculously Great Sex in a Long-Lasting Relationship.

Here, Dr. Snyder walks us through some of the critical steps he took—many of which can help you land your book deal!

I think you’ll also get a sense of how special this book is and why I can’t wait for it to come out.

Inspiration for a New, Fresh Book on Sex

Lisa: What inspired you to want to write a new book on sex?  Aren’t there a lot of sex books already out there?

Dr. Snyder: Yes, but most of them are variations on the same old things. They’re either about great sex technique, or how to make sex more exciting, or new discoveries in sexual science.  I wanted to write a book that talked about real feelings rather than technique or science.

I also wanted to go against the tide of all the new books on alternative sexualities and just write about plain old sex within ordinary long-term monogamous relationships. That’s what people are really looking for. It’s just not there yet.

One of the most important questions you asked me when we started out was, “Who’s your audience?”  Sex books tend to be written either for very conservative audiences or very progressive ones.

I decided to write a book for people in the middle who are sympathetic to both traditional and progressive values. I don’t know for sure how big this middle group might be, but we’re going to find out!

Lisa: Obviously, your publisher sees potential for a big audience—and that was my sense from the beginning as well. I have to say, though, when you say “just writing about plain old sex,” it didn’t feel like that to me—not plain old.

Love Worth Making is infused with a playfulness and love, really, and it gives readers something to aspire to in love making.

When we started working together, I encouraged you to focus on developing your platform as an author.

You did an excellent job of that. Can you share a bit about how you grew your platform and what were some of the most effective strategies?

The Platform That Led to a 6-Figure Book Deal

Dr. Snyder: When you told me I needed to start a blog, I was not pleased to hear this since I was already too busy. But once I began writing blog articles, I discovered I really enjoyed it.

As a blogger, you have to make it FUN TO READ—which is a wonderful practice for when you actually sit down to write your book.

Lisa: Yes! I agree. Your blog is such great practice for book writing in so many ways.

Dr. Snyder: The biggest problem with most sex books is that they’re boring. I decided I wouldn’t write anything that I couldn’t have fun developing. Then people started having fun reading my stuff, and the whole thing kind of snowballed.

I also fell in love with Twitter and began spending way too much time tweeting at @SexualityToday. Twitter is a great way to discover what other people in your field are thinking about.

The daily discipline of reducing your ideas to 80 or 90 characters is also extremely helpful as an author. Spend enough time on Twitter, and your writing will get much tighter and more efficient.

I wrote a piece awhile ago entitled “A Sex Therapist’s Guide to Twitter, Part I.”  I never got around to writing a Part II, because no one seemed interested in Part I. But I was glad to do the experiment anyway. It’s important as an author always to be experimenting.

Lisa: I agree. It’s likely that a few of our experiments fail to reap significant results, but that’s not how it works anyway. Take risks and try new things and some of them will stick—or produce wonderfully surprising results.

After you and I first spoke about building your platform, you went out and got quite a bit of national publicity. Can you share a bit about how you did that?

Dr. Snyder: One of the most helpful things you taught me was that media are always hungry for quality content. I’ve worked hard to cultivate relationships with journalists, either on twitter or through helping them with info they needed. I submitted many pieces to HuffPo  before they finally agreed to publish one of them.

I also spent some time interviewing people whose work I like, and posting the results on my blog. One of the people whom I interviewed helped introduce me to the editors at PsychologyToday.com which has been a useful platform-builder for me.

Lisa: I hope readers take away the importance of persistence when it comes to pitching national media like Huffington Post. During that time (of starting to build your platform) you collaborated on a perfume for Dolce & Gabbana. How did that come about?

Dr. Snyder: Okay, full disclosure:  I didn’t actually collaborate on the perfume itself!  I just helped host the Dolce & Gabbana launch event for their perfume Desire.

They called me out of the blue, and of course I said yes immediately. I’ve been waiting since then for another fashion house to call me, but so far the phone’s been quiet.

Lisa:  The fact that they called you out of the blue says a good deal about the momentum you gather as you keep reaching out as you did—on Twitter, the Huffington Post, to journalists.

As your work becomes more visible, somebody looking for the expertise you have finds you. And those are some of the best opportunities—the ones you didn’t plan or predict!

There were many agents interested in representing Love Worth Making. In fact, several of them called me! What were the most important considerations in choosing a literary agent?

Dr. Snyder: I learned so much from every agent I met with. I finally chose Todd Shuster at  Aevitas Creative  because of his reputation as a master of the craft, because he seemed the least in a hurry to get the proposal out to publishers, and because every time I spoke with him I felt calmer afterwards.

Lisa: That’s a great litmus test—both his commitment to perfecting the proposal with you and your internal compass—how you felt after your conversations.

Did your agent suggest any major changes to the book proposal? 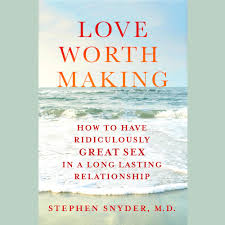 Dr. Snyder: He never stopped suggesting changes. He’d say, “Just tell me when you’ve had enough and we’ll stop there.” But his ideas were so good that I kept using them.

The agents at Aevitas Creative use a collaborative approach, so my proposal also got reviewed by several of his colleagues there. Their ideas were uniformly top-notch as well.

It was exciting for me to see my proposal keep getting better and better. But you have to have a certain masochistic streak in your personality to go through this over and over again.

Lisa: Can you share a couple of specific ideas that your agency contributed that helped make the book proposal even better?

Dr. Snyder: My agent suggested that the proposal be written in the first person—which I hadn’t heard of before, but which made it a lot less awkward and more conversational.

Lisa: Yes, certainly the standard format is third person, but with a truly excellent proposal, you can break the rules if you have a good enough reason.

Again, it comes down to experimenting—something you are really good at. Some authors need to give themselves permission to experiment—to take calculated risks. It’s not as natural or as easy for them.

Elements of a 6-Figure Book Deal

Love Worth Making went to auction and you signed a 6-figure book deal with St. Martin’s Press/MacMillan. What are some of the elements that made your book proposal so compelling?

Dr. Snyder: I think publishers liked that I’d taken a new approach to the subject, that it was actually fun to read, and that I clearly loved what I was doing.

Lisa: How did you get that to come across—how much you loved what you were doing, your passion for your work?

Dr. Snyder: I heard a story once about Robin Cooke, who wrote thrillers back in the day—that as he wrote he’d take his own pulse, and he’d delete anything that didn’t make his pulse race.

I decided to use a similar approach:  I made it a habit to delete anything that didn’t make me feel happy. After all, sex should be a happy thing—otherwise why do it?

I’d be embarrassed to tell you how many tens of thousands of words I’ve deleted over the last few years—but it’s a big number.

Lisa: That is so impressive! I remember the early drafts and they were good. I think many authors are happy with good enough. And publishing houses can be, too.

In my opinion, part of why you got such a significant book deal is your level of commitment to the writing.

Any advice you have for our readers about writing a book proposal and getting a top notch agent and publisher?

Dr. Snyder: Take the time to craft the very best proposal you can. Then get good people involved who can help you make it even better.

And make sure you’re having fun doing your proposal, because you want potential editors to actually enjoy reading it!

Readers, do you have any questions on platform building or how to write a book proposal? Ask as a comment and we will answer.

And enjoy this video that tells the story of how the idea for the book Love Worth Making first came about.